This blog takes about 10 minutes to read. It introduces the Fourier neural operator that solves a family of PDEs from scratch. It the first work that can learn resolution-invariant solution operators on Navier-Stokes equation, achieving state-of-the-art accuracy among all existing deep learning methods and up to 1000x faster than traditional solvers. Also check out the paper, code, article, and project page.

Thinking in continuum gives us an advantage when dealing with PDE. We want to design mesh-indepedent, resolution-invariant operators.

Problems in science and engineering involve solving partial differential equations (PDE) systems. Unfortunately, these PDEs can be very hard. Traditional PDE solver such as finite element methods (FEM) and finite difference methods (FDM) rely on discretizing the space into a very fine mesh. And it can be slow and inefficient.

The neural operator is mesh-independent, different from the standard deep learning methods such as CNN. It can be trained on one mesh and evaluated on another. By parameterizing the model in function space, it learns the continuous function instead of discretized vectors.

Operator learning can be taken as an image-to-image problem. The Fourier layer can be viewed as a substitute for the convolution layer.

Let be the input vector, be the output vector. A standard deep neural network can be written in the form:

where are the linear layer or convolution layer, and are the activation function such as ReLU.

The neural operator shares a similar framework. It’s just now and are functions with different discretizations (say, some inputs are , some are , and some are in triangular mesh). To deal with functions input, the linear transformation is formulated as an integral operator. Let be the points in the domain.

The map is parameterized as

Where is a kernel function and is the bias term.

For the Fourier neural operator, we formulate as a convolution and implement it by Fourier transformation.

The real-world images have lots of edges and shapes, so CNN can capture them well with local convolution kernel. On the other hand, the inputs and outputs of PDEs are continuous functions. It is more efficient to represent them in Fourier space and do global convolution.

There are two main motivations to use Fourier transformation. First, it’s fast. A full standard integration of points has complexity , while convolution via Fourier transform is quasilinear. Second, it’s efficient. The inputs and outputs of PDEs are continuous functions. So it’s usually more efficient to represent them in Fourier space.

We then add the output of the Fourier layer with the bias term (a linear transformation) and apply the activation function . Simple as it is.

Notice the activation functions shall be applied on the spatial domain. They help to recover the Higher frequency modes and non-periodic boundary which are left out in the Fourier layers. Therefore it’s necessary to the Fourier transform and its inverse at each layer. 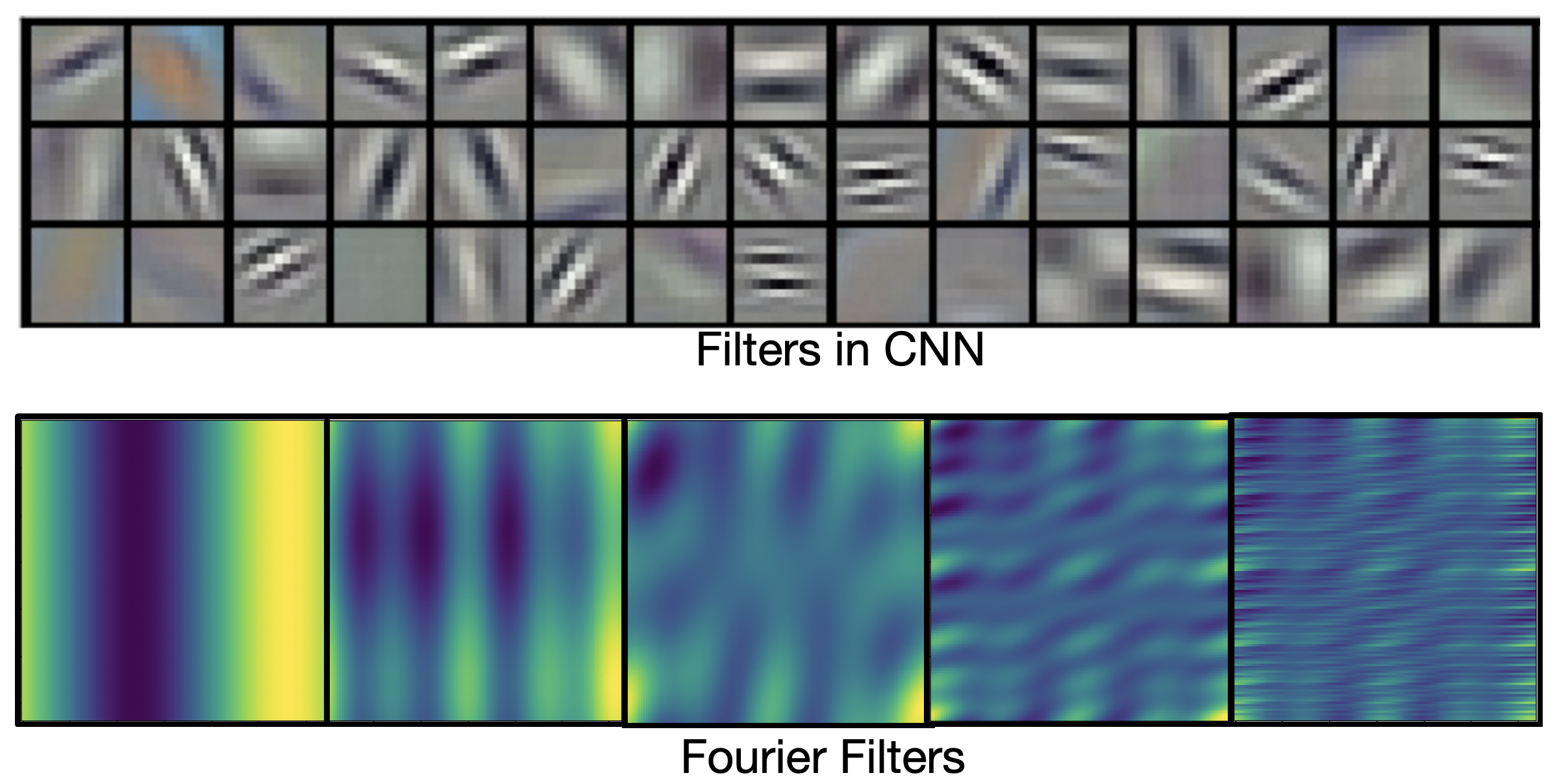 Filters in convolution neural networks are usually local. They are good to capture local patterns such as edges and shapes. Fourier filters are global sinusoidal functions. They are better for representing continuous functions.

The Fourier layers are discretization-invariant, because they can learn from and evaluate functions which are discretized in an arbitrary way. Since parameters are learned directly in Fourier space, resolving the functions in physical space simply amounts to projecting on the basis of wave functions which are well-defined everywhere on the space. This allows us to transfer among discretization. If implemented with standard FFT, then it will be restricted to uniform mesh, but still resolution-invariant.

The 1-d Burgers’ equation is a non-linear PDE with various applications including modeling the one-dimensional flow of a viscous fluid. It takes the form

We consider the steady-state of the 2-d Darcy Flow equation on the unit box which is the second order, linear, elliptic PDE

with a Dirichlet boundary where is the diffusion coefficient and is the forcing function. This PDE has numerous applications including modeling the pressure of the subsurface flow, the deformation of linearly elastic materials, and the electric potential in conductive materials. We are interested in learning the operator mapping the diffusion coefficient to the solution, defined by . Note that although the PDE is linear, the solution operator is not. 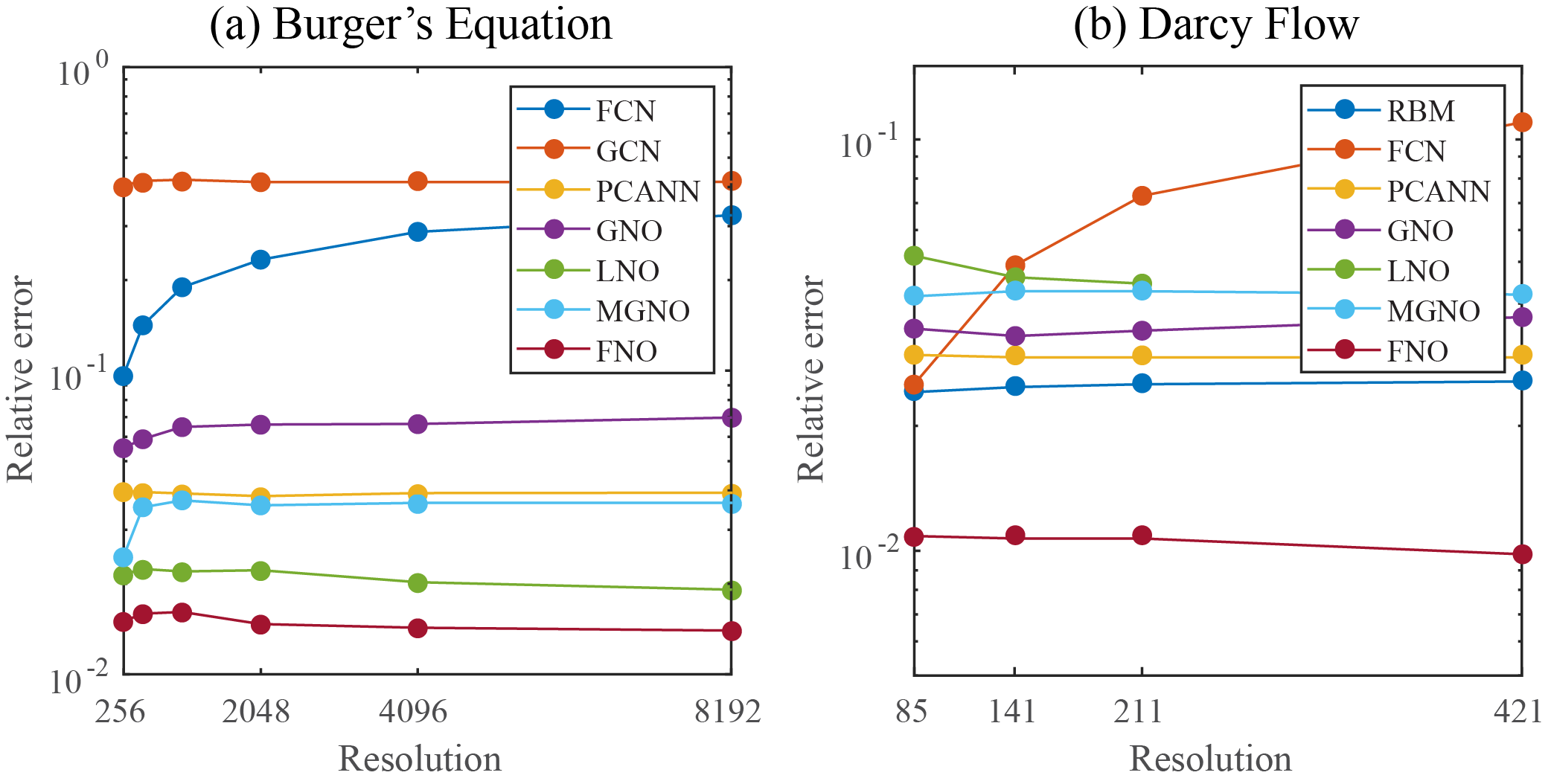 We consider the 2-d Navier-Stokes equation for a viscous, incompressible fluid in vorticity form on the unit torus:

The FNO-3D has the best performance when there is sufficient data ( and ). For the configurations where the amount of data is insufficient ( and ), all methods have error with FNO-2D achieving the lowest. Note that we only present results for spatial resolution since all benchmarks we compare against are designed for this resolution. Increasing it degrades their performance while FNO achieves the same errors.

FNO-2D, U-Net, TF-Net, and ResNet all use 2D-convolution in the spatial domain and recurrently propagate in the time domain (2D+RNN). On the other hand, FNO-3D performs convolution in space-time.

In this experiment, we use a function space Markov chain Monte Carlo (MCMC) method to draw samples from the posterior distribution of the initial vorticity in Navier-Stokes given sparse, noisy observations at time . We compare the Fourier neural operator acting as a surrogate model with the traditional solvers used to generate our train-test data (both run on GPU). We generate 25,000 samples from the posterior (with a 5,000 sample burn-in period), requiring 30,000 evaluations of the forward operator.